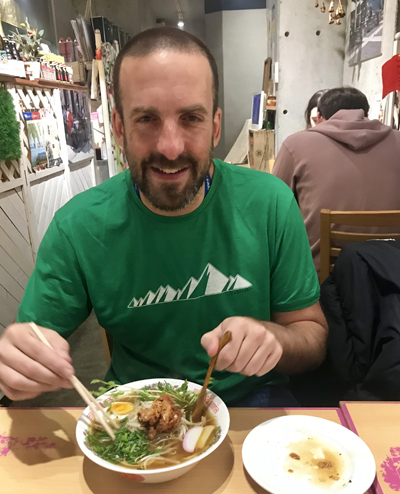 Writing is hard. Writing about yourself is harder. Motivation has been something that has really been missing for quite some time in my life, especially over the last year or two. I had always been running at a low ebb and I kind of figured that was just me and how I operated.

It wasn’t until I suffered a really bad collapse that I started to open my eyes and ears to my health. For the last 20 years I have lived a… ahem, full life. I have always worked either in hospitality or retail and have always enjoyed pushing myself to the extreme. I never slept enough, I drank far too much and I put all sorts of weird and wonderful things in my body that were excellent fun at the time, but in hindsight…

I pushed my body beyond its limits. The standard weekend and most weeknights would involve working 9-5, rush home, throw down some food, shower, and then rush out to DJ and party till all hours. Come home and collapse in a heap. Get up, rinse, repeat… I also cycled daily to and from work and more on the weekends. I skateboarded and also disappeared as much as possible to the snow to snowboard. Without knowing it, I was squeezing every last drop out of my body without replacing anything. And then one day I cycled to work, as I did every day, and basically collapsed on the desk. I couldn’t move. I figured I’d had a hard weekend or I had a virus. So I pushed on. Work was not great at the time and was really weighing me down. After a week or so of this, I couldn’t cope. I basically had a total breakdown, mentally and physically. I had to quit my job and had absolutely no idea what was happening. After many visits to the doctors and all sorts of specialists, I still had no clue. It was now late 2014.

It wasn’t until the New Year that I spoke via Skype to a friend in the UK who is a nutritionist that things began to click. I showed her my latest blood results via the laptop camera and she said after a few minutes “From these results I’m pretty sure you have coeliac disease… “. I had no real idea what that was. I mean, I knew about it, but had no real idea.

“You realise that you’ll have to give up beer and noodles…?” WTF?…

After the initial blood tests it proved that I had the raised coeliac antibodies. But there was a long wait until I was able to undertake the gastroscopy needed for proper diagnosis. In short, I didn’t pay much attention and continued as I was. I sort of got a little better. I kept drinking and eating as normal and my lifestyle pretty much stayed the same. I’d collapse and get up again and pay attention for a week or two and relapse back into normal Steve mode. In late 2016 I finally received a confirmed diagnosis for coeliac disease after having a gastroscopy. It wasn’t until early 2017 when I moved into a new house that I made a decision that things had to change. At this stage, my friend the nutritionist had moved back to Perth and basically sat me down and laid it all out, which in hindsight was the kick in the pants I needed. Through having coeliac disease, my body had not absorbed any of the good stuff it needed to tick for how many years? Who knows. It wasn’t only my digestive system that had suffered. My iron levels were seriously low. My energy was zero. My mental and physical state were both so bad, I had no idea what to do next. But it made sense to start with the one thing which I did now know for certain, now the biopsy had come through – I had to take full responsibility for my diet and exclude gluten 100% of the time, no cheating. In addition to this, I had to look at every other aspect of my life. My lifestyle. My diet. My sleeping habits. I had to relearn. I made mistakes, I pushed too hard. I learnt a lot about many, many things. Am I cured? Nope. Have I improved? Yep. Am I smarter? Debatable.

It is now 2019. I’m feeling way better. Not 100%, not even close, but I’ll take it compared to how I was. My friends and family have been awesome. I have had the continual ear of my favourite human and nutritionist who has helped me so much and my housemates have made our house totally gluten free (love you guys!).