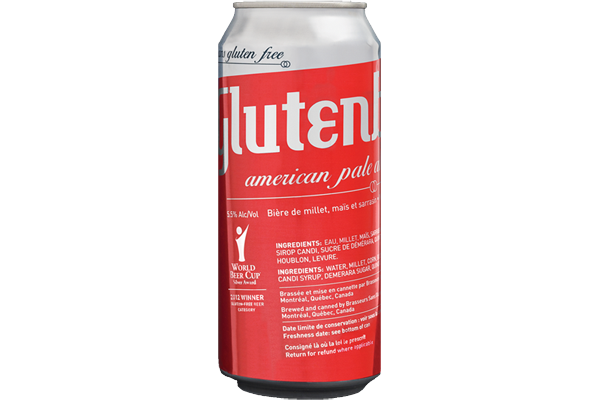 Glutenberg were founded in 2010 in Quebec, Canada by a couple of guys, one of them was diagnosed as a celiac (as they like to spell it on that side of the planet) in the early 2000s. They brew exclusively from 100% gluten-free ingredients, allowing for 0.00ppm of traceable gluten. I’ll delve into the 0% thing in another post, but in America they allow for 20ppm (parts per million) to be considered safe for a coeliac, whereas it has to be 0ppm to meet Australian standards. So I thought it was only the right thing to do and give their beer a whirl. I started with their APA or American Pale Ale which I found at Mane Liquor in Burswood. I haven’t seen it sold anywhere else yet, but if it is out there, please add it in the comments below.

Not sure what was going on, but I sat the beer on the counter for at least 15mins to warm up a bit and when I first opened the can, it foamed like a demon. Not sure if it was a one off, but very odd. But at least it proved that it had a bit of substance. So the Glutenberg APA is brewed with water, millet, buckwheat, corn, candi syrup, demerara sugar, quinoa, hops and yeast which is a strange combo. But it actually tastes pretty damn good. Most GF beers have this weird sweetness to it which I think is the sorghum. The APA still has a bit of sweetness, but not much at all. Coming from a beer loving and brewing background, it makes it a little hard as I find myself comparing the GF beer to my pre-coeliac days. I try not to, but it’s unavoidable. But as a stand-alone drink, this isn’t bad at all. The hops are there, it’s kinda sharp and has a good APA-style flavour, it’s bitter and has a grapefruit taste in there somewhere. At 5.5% and in a big can, it’s fairly hefty and I wouldn’t be operating any heavy machinery after a couple. So all in all, a nice surprise. Would I drink again. Yep, why not.

** IMPORTANT **
As we all know, coeliac disease is a serious condition. People have different tolerances to cross contamination and different allergens. So as always, please be vigilant and do your research before eating or drinking anywhere. The information on this website is accurate at the time of publication.