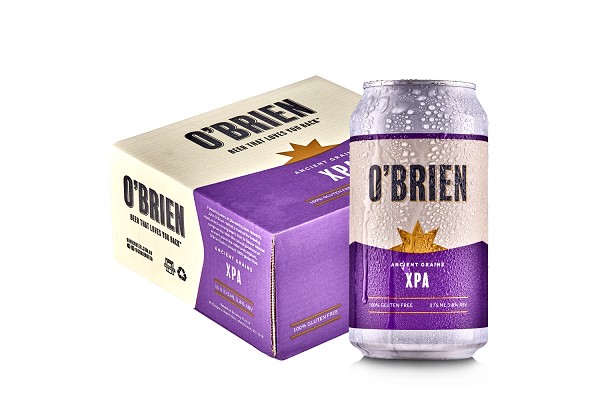 O’Brien’s beer was started by John O’Brien in 2005 after a couple years of planning. His intention was to “produce a great tasting beer that could be enjoyed by everyone, free from the ill affects of mass-produced wheat and barley.”

I read online that O’Brien’s beer has recently taken away six awards at the 2021 Australian International Beer Awards so I thought I better grab myself a can next time I saw it. To be very honest, when I first tasted O’Brien beer, I wasn’t a massive fan. But, this was many years back and from what I understand, they have made some changes. So I was just at the local bottleshop here in Margaret River and saw they had the XPA and Pale Ale (in cans!). So in the name of research, I grabbed one of  each.

First up I tried the XPA. Wow. It’s good. It’s really, really smooth. It retains a good head and has a full body. It also doesn’t leave any lingering tang or artificial taste in the mouth which is find happens with a lot of GF beers. So yeah, big fan. I looked at the can to have a read and saw that it was mid-strength coming in at 3.5%!! So, again, I was surprised as it has a big flavour to it which isn’t the case for a lot of mids. I think I might go back for more tomorrow! Nice work gang.

They have a link to all stockists on their WEBSITE. So jump on it and see who stocks near you!

** IMPORTANT **
Coeliac disease is a serious condition. People have different tolerances to cross contamination and different allergens. So as always, please be vigilant and do your research before eating or drinking anywhere. The information on this website is accurate at the time of publication.